More about the C-47 Dakota being gifted to the Indian Air Force by the son of a distinguished IAF veteran.  Rajeev Chandrasekhar, Member of Parliament and son of Air Commodore M K Chandrasekhar, has done what has previously been unheard off - donate an airworthy vintage aircraft to the IAF's heritage flight. This is a report of the initial rumours, efforts and how the story unfolded.

You have heard this story by now. Noted politician, Mr. Rajeev Chandrasekhar of Bangalore is gifting an airworthy C-47 Dakota to the Indian Air Force. Rajeev Chandrasekhar is the son of Air Commodore M K Chandrasekhar, a tireless veteran who himself has been the driving force behind one of the best (if not the best) memorial established for the Armed Forces in India. Air Cmde Chandrasekhar had been a decorated transport pilot who has established the National Military Memorial in Bengaluru.

Rajeev Chandrasekhar purchased the  grounded Dakota in the United Kingdom in 2010.  The Dakota (C/N 32820) in question started life in 1944 as KN397 in the Royal Air Force. It was then sold into civil market and registered as  G-AMSV on May 15, 1952.  For years the aircraft flew in the UK, mostly with Air Atlantique. In 2003, the airworthy Dakota was grounded. The Certificate of Airworthiness expired that year, though the aircraft remained on ground.  In 2007, it was sold to a US Owner and registered as N347DK, but it never left England.

In 2010, Mr. Chandrasekhar started a hunt to purchase a vintage Dakota with an intention to gift it to the IAF. A fortunate turn of events seem to have him run into Mike Edwards, the consultant for the IAF’s Vintage Flight, and Reflight Ltd which was doing the restoration work for the IAF’s Vintage Flight.  G-AMSV was at that time in Ireland and needed new engines and restoration work.   While it is not known exactly when Mr. Chandrasekhar purchased the aircraft, it does appear that it was registered in the name of his company Hindustan Infrastructure in September 2014. The final registration in his name happened on 22nd April 2016, but the aircraft belonged to him much earlier.  It was in July 2011 that the first images of this Dakota appeared online that showed its paint stripped off, but with IAF markings painted on it. 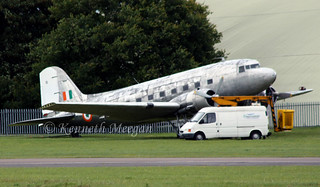 It was about the time Mr. Chandrasekhar requested the Indian Government if he could ‘present’ this aircraft to the IAF Vintage Flight, but the government at that time refused. The stated reason was that there was no precedent, but it was obvious that political differences played a bigger role in the refusal than anything.

So the Dakota languished in England, acruing hangar/storage fees that was becoming a costly affair. While initially there was an effort to paint the aircraft a representative Indian scheme, especially the scheme of the Dakota flown by Wg Cdr K L Bhatia into Srinagar in October 1947, at some point a decision was taken to paint the Dakota in camouflage scheme representive of WW2 RAF. But it retained the IAF roundels. The assumption by this webmaster is that the camo scheme made it easier to pass on the aircraft to new owners who may repaint it in RAF scheme should the said transfer to the IAF fell through. Luckily the fears were unfounded. With the change in government in India, the Ministry of Defence was more amenable to the ‘gift’. And for all purposes the offer was accepted, and the Dakota may soon make its flight to India to become part of the IAF’s Vintage Flight. 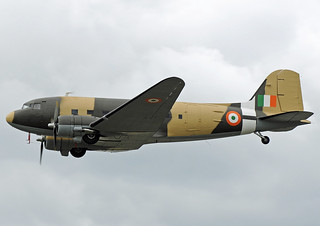 One man’s dream of helping the aviation heritage of India to commemorate his father’s service has come one step closer to fruition!