For years the identity of the Dakota in Yelahanka was a mystery. A recent tender ad, announcing its auction reveals its origins - but puts its fate in balance..

The news of the Dakota at Yelahanka surfaced sometime in early 2005, thanks much to the Google Earth enthusiasts. Air Marshal Subhash Bhojwani, then C-in-C Training Command confirmed at that time, that the area where the Dakota was displayed, though appearing to be within AFS Yelahanka, was actually part of the Border Security Force’s Signal Training Center. As the BSF had a fleet of Dakotas which were retired – one of them was bought to Yelahanka and displayed at the STC.

The identity of the aircraft was a mystery. However a recent public tender advertisement, from October 2010 reveals its identity as VT-CYX. The advertisement calls for submittal of bids by November 15th. The outcome of the Tender is not known. 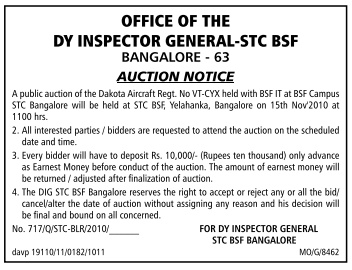 VT-CYX’s complete history can be found at Aero Transport DB (may require subscription) . It saw service with the USAF (42-93612), the RAF (KG676), Deccan Airways and Indian Airlines before it was taken up by the BSF.

<Editor’s Musings>: The Dakota is probably headed for a AME Training Organisation. I do wonder why the BSF suddenly decided to dispose it off.. I mean couldnt they have offered it to the IAF next door to take it over. All they would have done is knock down a wall and two it a few hundred meters and put it up as a preserved aircraft! After all Transport Training Wing was based at Yelahanka.

Can anyone from Bangalore find out its final fate?