A Piper Cub is preserved at the Heritage Transport Museum located off NH-8 in Taoru, around 35km from Gurgaon.

The Heritage Transport Museum is spread across a massive area of 90,000 square feet and located off NH-8 in Taoru, around 35km from Gurgaon. It was inaugurated by Haryana chief minister Bhupinder Singh Hooda in December 2013.  The museum, which has been inspired by similar structures in London in the United Kingdom and Los Angeles in the US, has been given shape by vintage car collector Tarun Thakral who went public with his collection of cars on Saturday to showcase the history of transportation in India.

The museum — which sprawls across four levels — was completed in three years at a cost of Rs15 crore, of which Rs. 6 crore was provided by the Union ministry of culture. Gurgaon-based architect Jyothi Rath has designed the building that houses artefacts collected mostly from private donors.

Representing the aviation component of the heritage transport is a Piper J3 Cub VT-CNM that previously belonged to the Government of Uttar Pradesh. 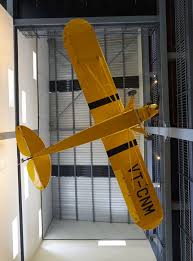 The view from below – VT-CNM hung by wires from the ceiling.