Hawker Hunter BA313, the gate guardian at the College of Air Warfare Officers Mess is revisited again to reveal its new colours!

The Hawker Hunter at the College of Air Warfare Officer’s Mess was first seen in December 1996. It arrived in a dis-assembled state and still had the faded colors of No.20 Sqn markings and the familiar grey-green Camo scheme. The CAW Officer’s mess, located across the Gymkhana grounds had a metal fence that time. The Hunter was soon assembled and displayed near the exit gate of the mess building. The aircraft sported the name “RASNE” on its nose and the stylised badge of the Thunderbolts (No.20 Squadron) very much visible.

The aircraft recieved a new coat of paint that obilitrated the older paint scheme. For somedays it did not bear the serial number. When finally the tail number BA-313 was applied, it was garishly done in large letters on the rear fuselage. Soon after a wall was constructed at the CAW that blocked the view of the Hunter from the road.

Hawker Hunter BA-313 ‘Rasne’ on display in the earlier days. The aircraft is in the familiar Grey-Green Camo with the ‘Lightnings’ Crest on the nose. The inscription ‘RASNE’ can be seen on the nose. 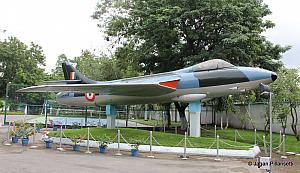 Hawker Hunter BA-313 ‘Rasne’ on display in the current pole-pylon arrangement. The aircraft undercarriage is now completely retracted and the display area has been made much neater.

BA-313 is one of the few displayed Hunters whose combat history we have a brief idea about. This aircraft took part in both the 1965 and 1971 Wars. It was operating from Halwara with No.7 Squadron in 1965. Flown on many interdiction missions, it is featured in atleast one gallantry awardee’s logbook for interdiction sorties.

1971 ops saw the same aircraft now flying with the OCU – The Operational Conversion Unit at Jamnagar. This aircraft was now part of the Adhoc 122 Squadron and was despatched to Jaisalmer once ops had commenced from there. Quite coincidentally it was flown on one of the missions by Wg Cdr FJ Mehta VrC, a local Hyderabadi who lives not far from the aircraft in Secunderabad.

Sometime in the first half of 2001, the Hunter display was changed. Two concrete poles were set up on which the Hunter now was raised and rested with its undercarriage in the closed position. The all-familiar “All-Grey” paint was applied to the aircraft. The nosecone being painted black. There is no record of a Hunter ever serving in such a paint scheme, but the lack of additional funds for paint or the surplus of grey paint available must have influenced the decision to paint it all grey!

Recently in August 2014, The Hunter was observed in close quarters again. Things have changed for the better. It now sports a neat Blue Green two tone camo scheme, which is a more accurate representation of its time in service

Hunter BA-313 still remains the only public warbird on display near the center of the city of Hyderabad-Secunderabad. Though MiG-21 U-660 has arrived on the scene, the latter is situated too far away from the main hustle and bustle of the city life.