Back in September 2014, we reported on the handing over of Dakota IJ817 to the Bangladesh Air Force in Delhi. . It was publicly opened for display at the BAF Museum at Tezgaon on 15 February 2015. Air Marshal Enamul Bari inagurated the aircraft in the presence of Indian Air Force officials.

Dakota HJ817 was subsequently transported by an IAF C-17 to Dhaka. And it was re-assembled and installed at the museum in recent days. On 15 Feb 2015, Air Marshal Enamul Bari publicly inagurated the aircraft.

The Indian High Commission in Dhaka said Air Marshal SB Deo, the Air Officer Commanding-in-Chief of India’s Eastern Air Command, formally handed over the aircraft to the museum in a ceremony on Monday.

Dakota IJ817 on display at Tezgaon – still sporting IAF Colours. The aircraft joins a MiG-21, an Ajeet, a Hunter and a DHC-3 Otter that have formerly served with the Indian Air Force. 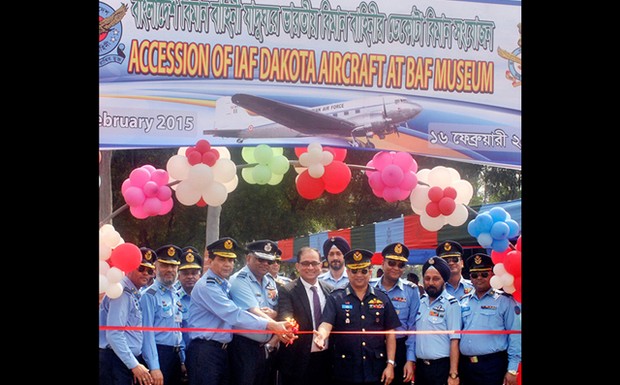 IAF gifts a Dakota for the BAF Museum