Navin Bala, an airline pilot is one of the few 'Indian Origin' pilots to have flown the Collings Liberator (or any other Lib for that matter!)

Very few Indian civilians can claim to have been aboard on an Indian Air Force B-24 Liberator, and almost none, bar the HAL Test flying team led by Capt Munshi, can claim to have piloted the aircraft. Another exception to this exclusive club is Capt Navin Bala of Air Deccan. Prior to taking up his assignment in Air Deccan, Navin was a commercial pilot in the Americas.

[Right] With the Dragon back on the ground. 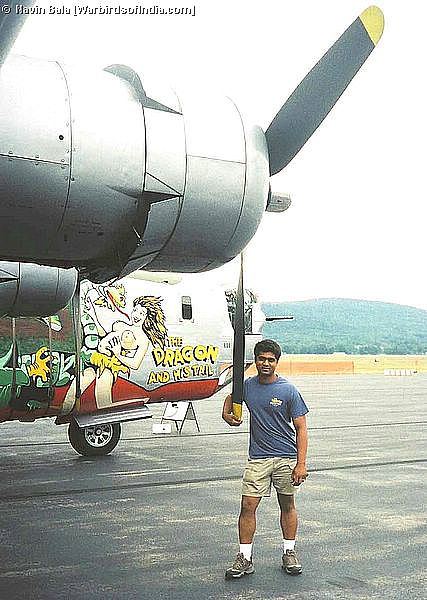 Navin’s father, Wing Commander G Balasubramanian retired from the Indian Air Force, after a long career as a fighter pilot and a test flying stint with HAL. His father was one of the few to have experience in both the multi engine B-24s and Constellations as well as the supersonic fighters like MiG-21s. Navin’s father flew in both the 65 and 71 wars before retiring to take up a career in Air India.

During his stay in America, Navin in his free time was affiliated with the Vintage Air Museum at Fort Worth, Texas. VAM operates a Boeing B-17 in airworthy status. Also available at that museum are a T-6 Texan, an F-86 Sabre, a Hawker Hunter, A Beech C-17, a Convair and a Boeing Stearman. Navin himself started an Indian Section in the museum with pictures, plaques, and miniature models

Navin is one of the few Indians to get a chance to captain the Collings Foundations B-24 Liberator, the “All American / Dragon and its tail”. He was on tour with the Collings foundation and has sent us a number of photographs from his collection.

“My father flew the B-24 for a very short period in 1965-66 as he was mainly from the Fighter stream. I did fly the B-24 and the B-17 as a civvie in the United States and in that course had the great opportunity to see a variety of warbirds fly. The next airplane I would like to fly would be a Bf109. Though thats a far off dream. But then again so was flying a B-24 10 years ago 🙂

To end I would like to say the B-24 was the most sluggish but ABSOLUTELY most exhilarating aircraft to fly. It could handle like a Fighter yet can also be as sluggish as a Mack truck… I could not love another aircraft more.”

Navin accumulated over 125 hours of flying in the Collings foundation B-24J. 42 hours as the captain of the aircraft.

Currently Navin is having a whale of time flying in the Indian skies. Besides his usual job in Air Deccan, he is on the lookout to acquire and restore a suitable warbird that has connections to the Indian Air Force.

Photo Contents of this page are copyright © Navin Bala