Every felt that what we need is our own eye-in-the-sky Satellite so that we can discover all the warbirds sitting derelict at various airfields in and around India? Well it turns out that fantasy has turned out to be true for atleast one airport in the country – The Indira Gandhi International Airport at Palam.  Thanks to the revolutionary Google Earth software download, it is now possible to examine every inch of the airfield at Palam in great detail.

Thanks to the software we have been able to confirm the existence of both the Dakotas from our previous reports and also confirm the presence of the three HS-748s of the NAA as well as the Boeing 707 of the ARC. 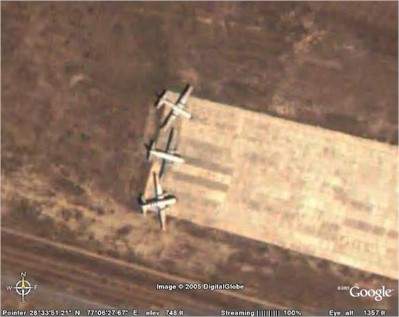 Above: an ex-IAF  Boeing 707 can be seen at the bottom of the picture parked at the south of the airfield. The 707 is known to have been in the same place for quite a few years now.

Three HS-748s of the erstwhile National Airports Authority are parked besides the main runway at Palam. The exact coordinates can be seen at the bottom of every image. 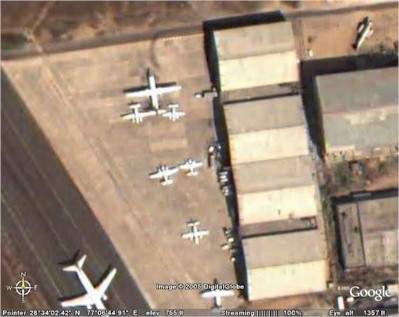 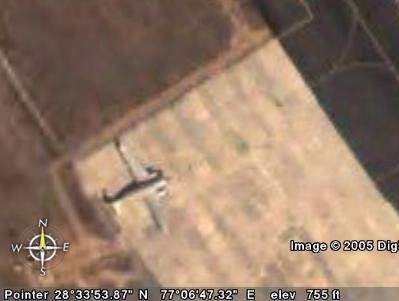 A Dakota fuselage without wings and engines can be seen at the top left of this photograph Another complete Dakota airframe can be made out sitting on the tarmac. 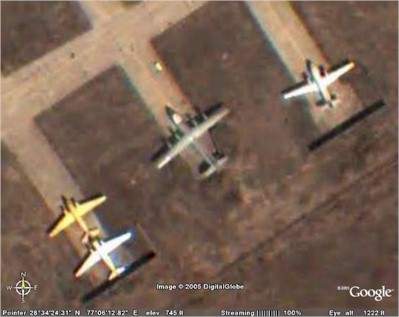 The Indian Air Force Museum’s big aircraft collection that is not available for public view. These include the two Dakotas, the An-12 and the Illyushin 14. 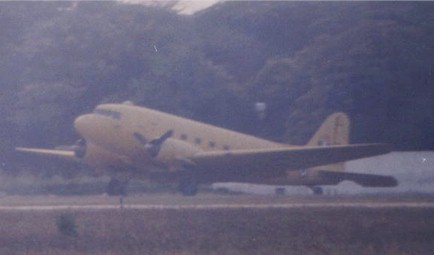 November, 2002: Recently I had a chance to fly down to Palam airport by a Jet Airways flight from Hyderabad to New Delhi. The flight landed at the Indira Gandhi International Airport at Palam and as it taxied back, there were some quite interesting sights around the airfield.

First the airliner taxied past the IAF Air Force Station side. There in some remote corner of the IAF aircraft dispersal were the transport aircraft of the IAF Museum collection. We could get a glimpse of the yellow painted Dakota, and the metallic finish second Dakota. The Illyushin-14 was parked in the same lot as well.

According to Kunal Verma, who used the Dakotas for a re-enactment of the Srinagar airlift in the IAF’s Diamond Jubilee film Salt of the Earth, None of the Dakotas were in taxiable condition, let alone airworthy. And the aircraft have been lying in the same area for years. The last time I saw the Silver Dakota inside the hangar was in the year 1989.

In addition to the IAF’s Dakota pair, I could see atleast one complete Dakota parked in the civil aircraft dispersal as well as another derelict Dakota dumped behind one of the Hangars just facing the ramp of the IAF aircraft. This derelict is missing the Engines and the outer wings beyond the engines.. The nose dome was also missing.