Bell 47 VT-DXE is currently located at the Carver academy of Aviation in Baramati town in Maharashtra. Seen in recent years at 2007 Aero India show, the helicopter was restored to display status by Mr Shrikant Kotnis, a 90 year old RIAF/IAF veteran who was decorated for his service in the 47-48 Kashmir war. Mr. Kotnis has now written an appeal about the helicopter, after trying for years unsuccesfully to keep the helicopter airworthy.

Bell G-47 VT-DXE was seen many years ago at the Aero India 2007 at Yelahanka. The helicopter belongs to Pushpaka Aviation and was leased by Bell aviation for static display duty at the Airshow. The Engineer who worked on this helicopter is Mr. Shrikant Kotnis, a WW2 and RIAF veteran, one who was also mentioned in dispatches during the 47-48 war for his service.

Mr. Kotnis helped restore this aircraft to running condition (though it was not flown in the air) and since then the helicopter has found its way to Carver Flight Academy in Baramati town in Maharashtra.

Mr. Kotnis tried for a while to keep the helicopter airworthy. The time now has come for the aircraft to go back to Pushpaka Aviation.  In this matter Mr. Kotnis has written an appeal which is reproduced here.. with some minor edits:

In  civil  life  also  it  has  done  yeoman's  service  in  Indian  Agriculture,  carrying  out  Aerial  Spraying  of  Pesticides  and  Fertilizers  in  Maharashtra,  Gujrath,  Punjab,  Karnataka  and  Kerala  on  various  types  of  crops. 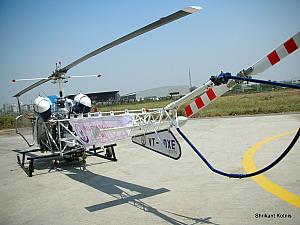 With  all  the  best  wishes,  respectful  regards  and  LOTS  OF  THANKS,