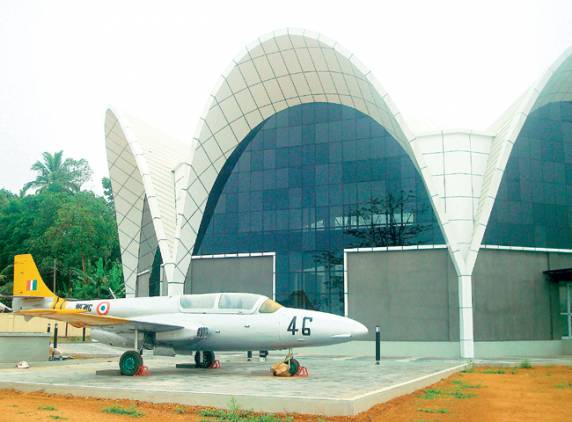 Cochin international museum is the first airport in India to have its 'own' museum dedicated to Aerospace heritage. It has opened in 2011 with modest objectives and an ex-IAF Iskra already on display.

Cochin International Airport, also known as Nedumbassery Airport and CIAL, is located at Nedumbassery, near Kochi, Kerala in India. It is the first Private Airport in the country, outside Indian Government's Airport Authority of India ambit in Public-Private partnership mode. The airport is the primary base for Air India Express operations and it is a focus city for many airlines like GoAir, IndiGo Airways, Jet Airways. India's national carrier, Air India also announced that it will be the anchor airline for the Cochin Airport along with its secondary hub.

Tucked away in one corner of the airport, in a road leading away from the main terminal is the CIAL Aerospace Museum. The aerospace museum, being developed by the Cochin International Airport Limited (CIAL) on its property was launched around February 2011.  The museum is part of CIAL’s efforts to generate revenue from non-aeronautical streams, and will showcase the origin and evolution of the global aviation industry. The total cost of the project is estimated to be around Rs.3 crore. CIAL has already completed the construction of a 120,000 sq.ft building on 2.5-acres of land.

Four exhibition halls will showcase the growth and evolution of the global aviation industry. Each room will have either a central model of different structures related to the airport industry or the models of fighter planes and helicopters.The museum will also display the evolution of flying machines like passenger aircrafts, fighter planes, helicopters, other aircraft engines and their components. It will also showcase the replicas of various famous airports in the world and much more. The original ambitious plans indicated a display of 10-12 aircraft of different vintage. At present, the museum has one PZL Iskra [W1746] on display outside the main museum building.

Iskra W1746 appears to be displayed with a fake undercarriage built for the aircraft. We assume that the actual undercarraige made its way inside the main museum as display components. A couple of Automobile wheels with some straight pipes seem to have been used. The give-away being the main wheels are outward facing on the iskra compared to the inward facing wheels covered by the wheel bay covers as seen here.