Firefly TT Mk.1 INS-112 on display. Note the foothold recesses just below the observers position on either side of the roundel. The ‘Glass House’ at the Observers position in the rear does not seem to be an original and was probably scratchbuilt. The quality of the Pilot’s Canopy and the observer’s glass house is quite good. 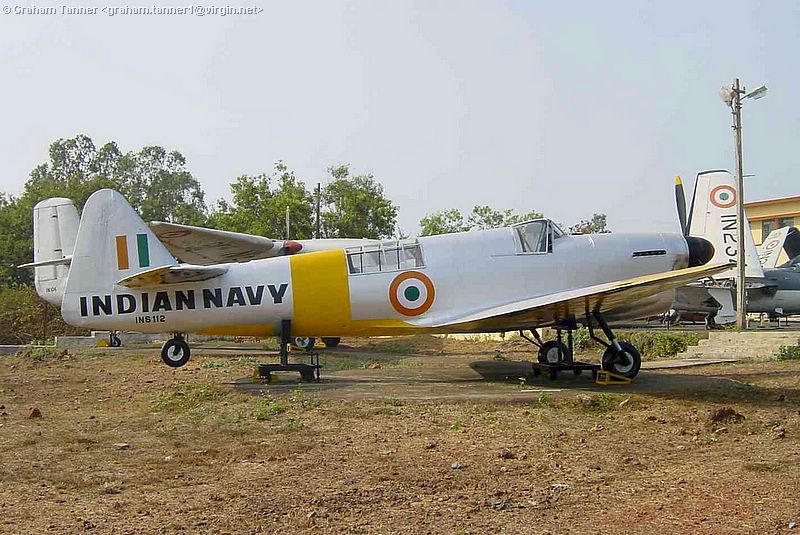 The aircraft was probably built up from the remains of a Firefly fuselage which was extant from the firewall just ahead of the cockpit and upto the tail. The team constructed an engine cowling, spinner, propeller, cooling vents, Oil cooler air intakes on both sides of the engine cowling, a complete undercarraige and tail empennage.

While a reasonable job has been done on the main fuselage, the engine cowlings came out the worst – looking like something grafted out of a DHC-1 Chipmunk, the cowlings along with the Spinner and Propeller look out of place and completely distracts from the Firefly look. Many a visitor has emailed us asking if it was a ‘Replica’ and were flabbergasted when we told them it was an original aircraft!

Others have commented that a Harvard’s tail might have been used to construct the tail empennage. Whether correct or not, the team had done good work in this area. Similar good work has been done in the pilot and observer canopy areas.

The good quality of restoration done on the fuselage is again marred by the paint job. Big Bold letters proclaim ‘INDIAN NAVY’ – a style that has not been seen on the firefly in the numerous historical photographs displayed inside the museum.

Overall while the restoration effort is appreciated, its a case of ‘what could have been’. The aircraft can still be made to good look. Remove the current undercarraige – change the forward engine cowlings and the propeller blades, fabricate an original ‘glass house’ for the observer, change the paint scheme that includes the Yellow and Black underside typical of Target Towing aircraft, we will have a winner – and a warbird that makes the trip worth visiting.