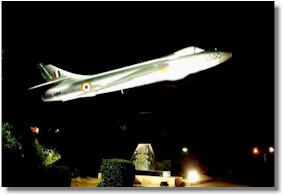 The Officer’s Mess of Air HQ is another place where more warbirds are seen. Phil Camp, Aviation historian and photographer during his recent visit to Air HQ has confirmed the presence of an Ajeet, A MiG-21bis and a Marut at the location.

Western Air Command HQ at Subroto Park has two warbirds displayed in a unique fashion. There is a Mystere and a Gnat mounted on pylons depicting an era from the 1965 War. A T-59 tank from Longewala too finds its place in the display area. In 2003, A Hunter was installed on a pylon in the Subroto Park area. This aircraft was previously held with the IAF Museum.